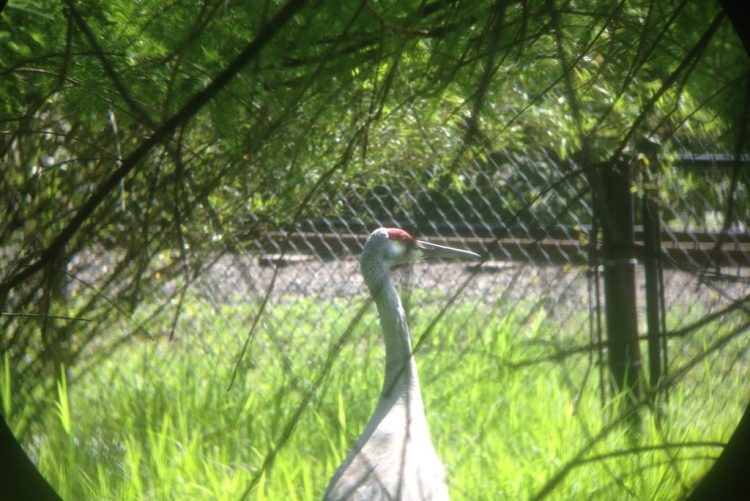 Cranes are a family of long-legged,long-necked birds. 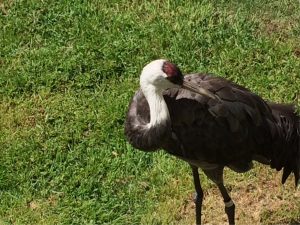 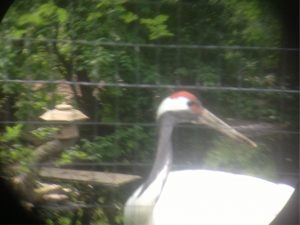 This highly endangered Crane is revered in Japan. Adult red-crowned cranes are named for a patch of red bare skin on the crown, which becomes brighter during mating season. Overall, they are snow white in color with black on the wing secondaries, which can appear almost like a black tail when the birds are standing, but the real tail feathers are actually white. 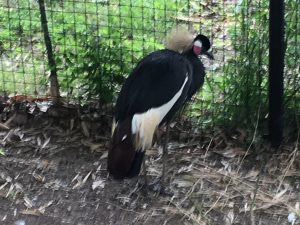 The black crowned crane (Balearica pavonina) is a bird in the crane family Gruidae. It occurs in dry savannah in Africa south of the Sahara, although in nests in somewhat wetter habitats. There are two subspecies: B. p. pavonina in the west and the more numerous B. p. ceciliae in east Africa. 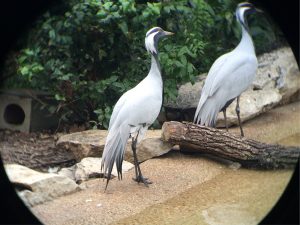 The demoiselle crane (Grus virgo) is a species of crane found in central Eurasia, ranging from the Black Sea to Mongolia and North Eastern China. There is also a small breeding population in Turkey. These cranes are migratory birds. Birds from western Eurasia will spend the winter in Africa whilst the birds from Asia, Mongolia and China will spend the winter in the Indian subcontinent. The bird is symbolically significant in the Culture of India and Pakistan, where it is known as Koonj 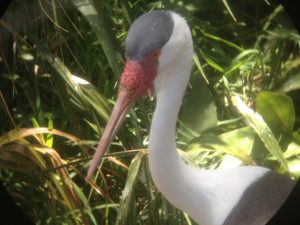 Like most cranes the social structure of the Wattled Crane is a breeding pair and its young. However during non-breeding season flocks of up to ten individuals may be seen. This species is more dependent on the wetlands than any other species in the family. Although wattled cranes can be found in eleven countries the largest concentration is in the Okavango Delta in Botswana. Therefore it is much more susceptible to changes to the river systems in the area. Construction of dams for hydroelectric plants is a major threat to the species. This species is protected under the Agreement on the Conservation of African-Eurasian Migratory Waterbirds
Wattled cranes forage in shallow water. Much more herbivorous than other cranes the main food is tubers. Aquatic insects are eaten to supplement the diet. 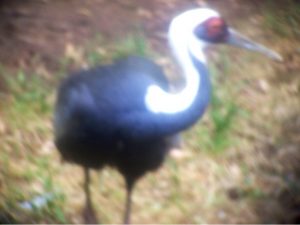 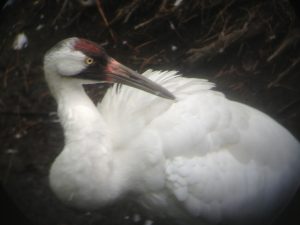 The whooping crane (Grus americana), the tallest North American bird, is an endangered crane species named for its whooping sound. In 2003, there were about 153 pairs of whooping cranes. Along with the sandhill crane, it is one of only two crane species found in North America. The whooping crane’s lifespan is estimated to be 22 to 24 years in the wild. After being pushed to the brink of extinction by unregulated hunting and loss of habitat to just 21 wild and two captive whooping cranes by 1941, conservation efforts have led to a limited recovery. As of February 2015, the total population was 603 including 161 captive birds. 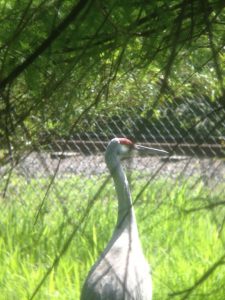 The sandhill crane (Antigone canadensis) is a species of large crane of North America and extreme northeastern Siberia. The common name of this bird refers to habitat like that at the Platte River, on the edge of Nebraska‘s Sandhills on the American Plains. This is the most important stopover area for the nominotypical subspecies, the lesser sandhill crane(Antigone canadensis canadensis), with up to 450,000 of these birds migrating through annually. 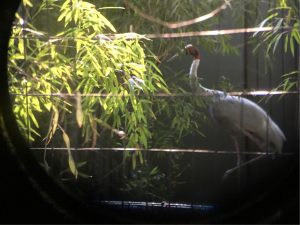 The sarus crane (Antigone antigone) is a large non-migratory crane found in parts of the Indian Subcontinent, Southeast Asia and Australia. The tallest of the flying birds, standing at a height of up to 1.8 m (5 ft 11 in),[3] they are conspicuous and iconic[4] species of open wetlands. The sarus crane is easily distinguished from other cranes in the region by the overall grey colour and the contrasting red head and upper neck. They forage on marshes and shallow wetlands for roots, tubers, insects, crustaceans and small vertebrate prey. 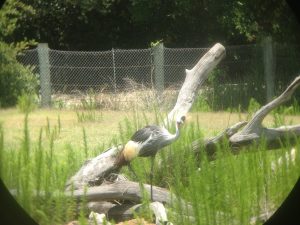 The grey crowned crane is closely related to the black crowned crane, and the two species have sometimes been treated as the same species. The two are separable on the basis of genetic evidence, calls, plumage and bare parts, and all authorities treat them as different species today 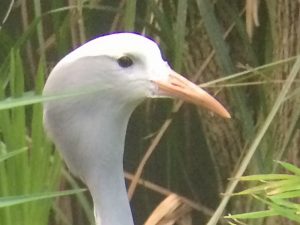 The Blue Crane, also known as the Stanley is found only in the southern part of Africa. Over 99% of its population is found in South Africa. It is the national bird of South Africa.
The population is declining. The major threats are direct poisoning and habitat loss. Collisions with power lines are increasing and land being used for agriculture is destroying this species habitat.